It covers a geographic area 750 miles wide, includes 8 states, a Canadian Province and has a freshwater shoreline of more than 10,000 miles.  What is it?  The Great Lakes basin.

With this lead in, James Klassen and Alison Slaats presented an overview of the Great Lakes Restoration Initiative project at the Minnesota GIS/LIS 2012 Conference.  GLRI, funded by the EPA and USFWS, is investing resources to clean up toxic substances, combat invasive species and restore wetland and shore habitats in the Great Lakes basin.   SharedGeo is contributing to these goals by creating a data catalog and mapping tool, CoMap.  Together these tools pull together data from many agencies and organizations across this large geography.

The presentation explained that in addition to the catalog and CoMap, James Klassen has optimized delivery of over 40 TB of imagery and remote sensing data in ready-to-use services.  In addition, it was described how this project was accomplished using open source software, such as GeoMoose, Mapserver and OpenStack Object Storage (Swift).

The presentation was well received and generated some good conversations during and after the conference.   To learn more, see the GLRI presentation slides or check out the GLRI project page.

September 2, 2012 by central No Comments 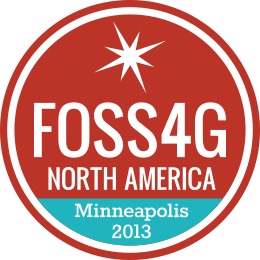 In support of the Free and Open Source Software for Geospatial (FOSS4G) North America event that will be held in Minneapolis, Minnesota on May 22-24, SharedGeo has agreed to provide contract services as deemed necessary by the event Local Organizing Committee.  Under terms of the agreement signed between the Open Source Geospatial Foundation (OSGeo) and SharedGeo in late August, SharedGeo will arrange and contract for facilities and professional services that are needed to make the event possible.  SharedGeo Executive Director Steve Swazee commented: “We are exceptionally pleased that the world’s preeminent education organization for sponsoring development of free open source software for geospatial has entrusted SharedGeo to act as the enablement organization for next year’s North American Conference. Given FOSS4G efforts support non-profits, units of government, and wide variety of other situations where cost would be a deterrent to effective geospatial solutions, we believe our mission to support the common good, and that of OSGeo, align very closely.”

Details of the event are expected to be released in early December on the FOSS4G North America website.

SharedGeo is pleased to announce that effective August 2, 2012, SharedGeo has assumed full responsibility for the EPC Updates blog, formerly maintained by the Emergency Preparedness Committee of the Minnesota Geospatial Information Office (MnGeo).  This arrangement was reached after MnGeo determined restructuring of various services at the office meant it would be preferable to have the blog hosted elsewhere.  SharedGeo will donate the time of Executive Director Steve Swazee to maintain EPC Updates, a blog which provides weekday review of cross-cutting geospatial and related technology news focusing on the Emergency Services Sector.

Today, SharedGeo announced it has commenced the first of what it hopes will be many “Shared Funding Projects”.  In concept, these projects use SharedGeo as the donation and management hub for projects that one entity alone does not have the funds or resources to back.  A rewrite of the U.S. National Grid Mashup for the Google Maps API is the kickoff project.  The project has a total budget of $5,000, with SharedGeo contributing the first $1,000 to get the project underway.   When complete, this project will be available to the public without charge.  Donations to SharedGeo are deducible to the full extent allowed by law.  Learn more about Shared Funding Projects or the U.S. National Grid Mashup project.

SharedGeo learned today it has been accepted as an approved vendor in the State of Minnesota IT Professional Technical Services Master Contract  Program (MCP) – 902TS.  As such, local and state units of government throughout Minnesota can purchase products from SharedGeo with minimal paperwork.  The areas where SharedGeo qualified to deliver services are as follows:

SharedGeo Executive Director, Steve Swazee, commented that, “This is a fabulous development for both SharedGeo and local and state government agencies in Minnesota.  With minimal paperwork, Minnesota governments will now have access to some truly unique and inexpensive geospatial solutions created by programmers who have been on the cutting edge of technology for many years.  We look forward to supporting the public sector in any way we can under the Master Contract program.”   Learn more.

Recently, the SharedGeo Board of Directors voted unanimously to become a sponsor of the Geospatial Information Technology Association (GITA) of Auroa, Colorado.   As such, it became GITA’s first “Bronze sponsor”, a sponsorship level tailored for small businesses and nonprofits such as SharedGeo.  In light of this development, SharedGeo Executive Director Steve Swazee offered the following:

“Although GITA is often thought of as an organization where only the likes of ESRI, Autodesk, GE and other major players in the infrastructure and geospatial communities participate, SharedGeo appreciates the affordable opportunity to sponsor another nonprofit that has led the way on several issues of high importance to SharedGeo.  Among these is GITA’s eight-year-old effort to develop national awareness about the important interplay of geospatial technologies, infrastructure, and emergency response as embodied in their Geospatially Enabling Community Collaboration (GECCo) program.  Additionally, GITA’s development of a “Thought Leaders Symposium” is another area where we believe our interests align closely.  Structured to help America’s public-private “Decision Makers” gain in-depth understanding of the significant challenges that lie ahead as geospatial technology continues to develop and move ever more into the main stream, we believe this upcoming event will be very important for any leader who wants to effectively combine technology, policies and people in a way that ultimately creates a “best practice”.  As such, SharedGeo is a proud and committed sponsor of GITA.”

Jim Klassen, one of the SharedGeo’s programmers, is presenting at FOSS4G North America 2012.  Check out his talk on Wednesday April 11 at 2pm.   He’ll be explaining how he set up a system to store and serve 50 TB of imagery on a limited budget.   Read more about his presentation, Build your own Cloud – an Open Source approach to Imagery Storage.

SharedGeo’s Technical Director, Bob Basques, has been selected to present at the Wisconsin Land Information Association’s (WLIA) Annual Convention being held in Stevens Point, WI on February 15-17, 2012.  The subject of Bob’s talk will be GeoMoose, an open source software project that Bob helped develop while working in the Public Works Department of the City of St. Paul, MN.  GeoMoose is currently in the final stages of becoming an endorsed project of the Open Source Geospatial Foundation.

What’s a  “GECCo”? In this case it is a 2-day invitational session to promote Geospatial support for Emegency Managers, “Geospatially Enabling Community Collaboration”, October 27-28, 2011. Part of a nationwide series of events inaugurated by GITA, the Twin Cities GECCo is supported by a number of sponsors including the U.S. Department of Homeland Security (DHS), Geospatial Information and Technology Association (GITA), and local participants including members of the EPC, MetroGIS, and SharedGeo.

What do you get when you put together 900 people – software developers, users, sponsors, from legendary coders to newbies – and let them talk about their latest Open Source projects? Lots of excitement, lots of sharing, lots of opportunities for collaboration – and a lot of great solutions for problems ranging from national infrastructure and global environments to mapping slums to empower residents. Check out the talks and resources available online from FOSS4G (Free and Open Source Software for GeoSpatial), including talks by SharedGeo staff.